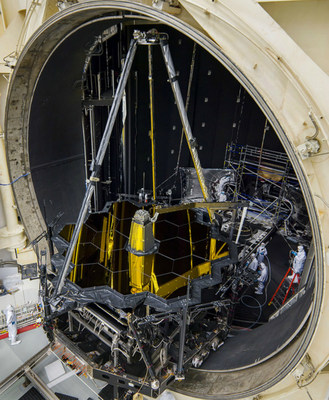 WASHINGTON, Jan. 5, 2018 /PRNewswire-USNewswire/ — Media are invited to NASA’s Johnson Space Center in Houston at 2 p.m. EST Wednesday, Jan. 10, to hear about the results of recent cryogenic vacuum tests on the James Webb Space Telescope, and the next steps on the observatory path to space.

The news conference will air live on NASA Television and the agency’s website.

U.S. media who would like to participate in person must call the Johnson newsroom at 281-483-5111 by 6 p.m. Tuesday, Jan. 9. Reporters who wish to participate by telephone must call Johnson’s newsroom no later than 1:45 p.m. Jan. 10. Those following the briefing on social media may ask questions using the hashtag #askNASA.

Webb was tested as a complete optical system in Chamber A at Johnson, which mimics the space environment the telescope will experience during its mission. Built in 1965 to conduct thermal-vacuum testing on the Apollo command and service modules, Chamber A is the largest structure of its kind in the world and is a listed National Historic Landmark.

The James Webb Space Telescope is the world’s premier infrared space observatory of the next decade. Webb will help to solve mysteries of our solar system, look to distant worlds orbiting other stars, and probe the mysterious structures and origins of our universe and our place in it. Webb is an international program led by NASA with its partners, the ESA (European Space Agency) and the Canadian Space Agency.

For more information about the Webb telescope, visit: