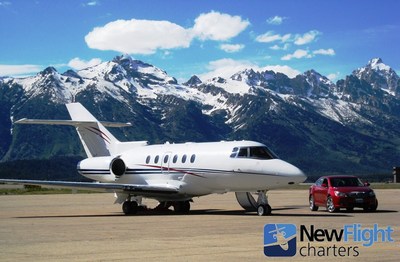 A major summer vacation destination even without a total eclipse, Jackson Hole and the Parks are expected to exceed all-time records for visitors, lodging and traffic. Visitor demand has been building for the eclipse for over a year. Upscale lodging opportunities have expanded as a result; a recent advertisement featured a high-end 3-bedroom home with a guest house at $30,000 for the week.

This increased demand for the eclipse event is resulting in record private jet and charter aircraft traffic at the Jackson Hole Airport, already a popular hub for private jet travel and one of the top 3 summer mountain resort airport destinations in the U.S. along with Aspen, CO and Sun Valley, ID. Located inside Grand Teton National Park, Jackson Hole Airport is the only airport in the country inside a national park.

The eclipse’s centerline path of totality will pass directly over the airport itself. Private jet traffic surrounding the Aug. 21 date however, will be far from eclipsed.

August is peak season and already a busy month for private jet activity in Jackson Hole, with daily private air operations averaging over 50 arrivals or departures plus more than 20 private aircraft parking on the ramp overnight.

Aircraft parking at Jackson Hole Aviation, the local FBO/private terminal, is expected to jump to near capacity with ramp space possibly filled and the potential of aircraft being turned away. Depending on the volume of air traffic into Jackson Hole, the FAA may implement Special Traffic Management Programs (STMP) for private aircraft, where advance reservations known as “slots”, are needed for arrivals or departures.

“Right now, August 18 looks to be busier than a December 26 at the airport,” said New Flight Charters president Rick Colson. “We knew this would be busy but the numbers we are seeing are amazing.” The day after Christmas is normally the busiest day of the year for private jet arrivals, bringing winter vacationers to Jackson Hole and its world renown ski destination Jackson Hole Mountain Resort, the Four Seasons Resort and other high-end lodging.

Commercial airline traffic will be increased as well, an additional 15 commercial flights will be landing and departing between August 18 and 23 ? three more per day than normal. The Jackson Hole Airport is already the busiest airport in Wyoming.

The airport is planning for the eclipse. With its location along the precise centerline of the eclipse’s path of totality, access to the airport will be limited for both those on the ground and in the air to help manage crowds and traffic. The runway will be closed for 1 hour around the approximately 2-minute totality at 11:35am. The closure will be from 30 minutes before, to 30 minutes after the totality. And those driving to the airport that day will need their private aircraft’s tail number, an airline boarding pass, or a legitimate reason to access to the airport.

According to Teton park spokeswoman Denise Germann in the July 26 edition of the local Jackson Hole News & Guide, “‘A typical August day is a very busy day at Grand Teton National Park,’ Germann said. ‘This Aug. 21, the day of the total eclipse, we’re expecting to be the busiest day in the history of the park.’

“Above all else, Germann stressed, visitors should come prepared for a long day. Bring food, water, a full gas tank and necessary medications.”

Arriving private jets would be wise to do the same.

Private jet charter information to and from Jackson Hole, Wyoming, including more than 40 current flight specials can be seen at Jackson Hole Jet Charter. 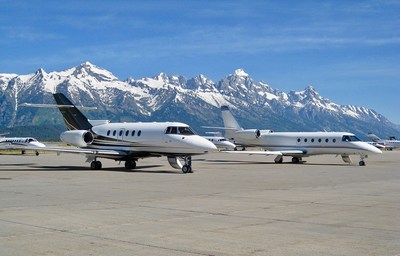